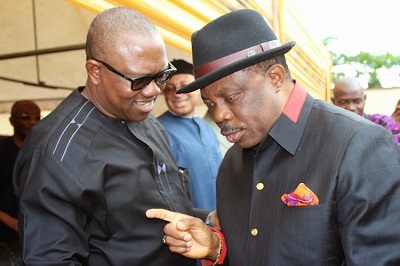 The Anambra State chapter of Peoples Democratic Party (PDP) has accused Governor Willie Obiano of abandoning projects initiated by his predecessor, Peter Obi.
Rising from its meeting yesterday in Awka, the state capital, the Anambra PDP Chairman, Prince Ken Emeakayi, asked the state governor to explain to the people the local government allocations he had received since assuming office in March 2014.
The party also alleged that the All Progressives Grand Alliance (APGA) secretariat was being built with state funds.
In an open letter to Obiano, the Anambra PDP alleged that the governor was planning to appoint caretaker transition committees after the expiration of the tenures of council chairmen and councilors.
The party, however, requested Obiano to direct the State Independent Electoral Commission (ANSIEC) to conduct a by-election into the Office of Chairman of Ihiala in line with the court’s decision.
PDP said: “We demand to know the contract sum of the overhead bridge and flyover under construction at Awka.
“May it please our governor to make public, the source of funding of the APGA secretariat situated on a vast government land.
“The governor is also requested to direct ANSIEC to announce the date for the next local government elections, which ought to hold before the January 2016 expiration of the present tenure.
“We hope and believe that you will address the issues to reassure the people that we have an accountable government”.
At the meeting, the party appointed John Okigbo from Ojoto in Idemili South as the new secretary, following Chief Joe-Martins Uzodike’s decline of the position.
The party also ratified the suspension of some chieftains, including its governorship candidate in the 2013 election, Comrade Tony Nwoye, and Prince Osy Ezenwa, among others.