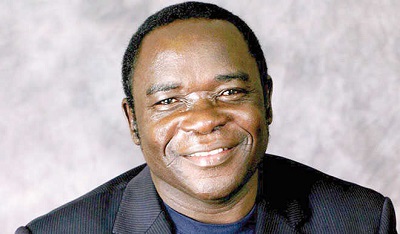 The Bishop of the Sokoto Catholic Diocese and member of the National Peace Committee, Matthew Hassan Kukah, has denied that the peace agreement signed prior to the 2015 presidential election by former President Goodluck Jonathan and then Gen. Muhammadu Buhari (retd.), included a deal shielding alleged corrupt public officials from probe.

The clergy and public commentator on socio-political issues, who has been in the news recently for his comments regarding President Buhari carrying out probes, clarified that the peace agreement was to ensure the leading political gladiators in the concluded polls put Nigeria first and not do anything to jeopardize the existing peace.

Apparently piqued by the various interpretations given to his call on Mr. Buhari to ensure his anti-corruption war follows due process, the Catholic Bishop slammed Nigerians for believing news reports “from the gutter” and the things that make them “salivate”.

According to him, people are making up their stories about what both President Jonathan and General Buhari agreed upon.

“On that day, I read out the full text of the agreement. It was published widely in Nigerian newspapers. So, did you journalists not read it and did Nigerians not read it? Where are these mischief makers manufacturing their lies from?” he queried.

There is a widespread belief the peace agreement imposed certain conditions on Buhari, for instance, that if he emerged winner of the polls and is sworn in as President, he would not probe the Jonathan administration.

It was also speculated that the former president conceded defeat on the mutual understanding that neither he, nor his administration’s officials, most of whom are perceived to have corruptly enriched themselves and cronies, would be tried for corruption.

“I don’t understand how those who already have an idea of what General Buhari stands for will turn around and impute the things they are imputing”, Kukah fumed in response to the speculations. “The focus on the agreement was that they would do everything in their power to put Nigeria first and that they would accept the results of the elections. They both agreed but of course with the caveat that they are seen to be free, fair and credible”.

He insisted that “No one said anything about probe or any other thing that might follow. This is why it is astonishing but not surprising that some mischief makers will jump out and say that I am shielding President Jonathan from probe. I am disappointed but not sad. We can do better than this with some level of honesty”.

On the purpose of the committee’s meeting to President Buhari about two weeks ago inside the Presidential Villa, Abuja, Kukah insisted that it had nothing to do with Jonathan as widely believed and urged Nigerians to be cautious of how the poke their noses in the affairs of the ex-president.

“How can President Jonathan’s name feature in our discussion? First, the media reported a day before our meeting that President Jonathan and President Buhari had had a meeting two days earlier. Both men are former heads of state and president. I imagine that President Buhari must be laughing at all this nonsense by those who are publicly wearing and displaying their ignorance as a garment of honour. A former president is a former president and we the ordinary people must be careful in poking our noses in their affairs”, he said.