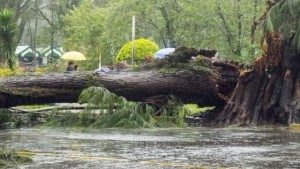 Several were killed when houses were submerged under rocks and mud. Others are reported missing in flooded areas.

Thousands of people have been evacuated to higher ground and some domestic flights were cancelled.

However it weakened as it moved northward off Taiwan’s east coast, AFP news agency said. It is the ninth of an average of 20 that hit the Philippines each year, the country’s weather bureau said.