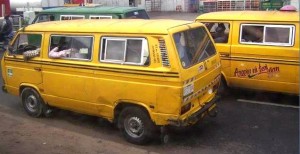 A police officer attached to Orile Division yesterday died in a motor accident opposite Fatgbems Filling Station, along Oshodi-Apapa Expressway.

Reports say that the policeman died after he fell off the bus of the driver he was trying to apprehend. The driver was said to be picking up passengers along the road, infuriating the policeman who jumped into the moving bus with number plates KJA305XL.

According to Vanguard, the bus sped off, while trying to escape, and hit another car with number plates LND340DF. The sudden stop made the policeman to fall.

An eyewitness told Vanguard that as the cop fell, a trailer ran over him, killing him instantly. On seeing this, the commercial bus driver and his conductor took to their heels and abandoned the vehicle.

Operatives of the Federal Road Safety Corps (FRSC), Lagos State Traffic Management Agency (LASTMA) and policemen from Trinity and Orile Divisions were soon after the occurrence drafted there to ensure free flow of traffic as onlookers besieged the area.

Officers from the Trinity Police Division were said to have later taken the corpse of the Policemen to Orile Police Station and later to Mainland Hospital Mortuary, Yaba.