A police officer attached to Orile Division died in a motor accident opposite Fatgbems Filling Station, along Oshodi-Apapa Expressway at about 9a.m., yesterday. 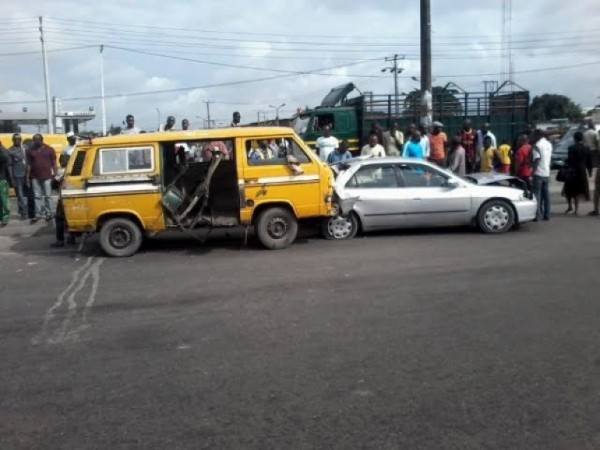 It was learned that the deceased, while attempting to apprehend a commercial bus (Danfo) driver, who was picking up passengers along the road, jumped into the moving bus with number plates KJA305XL.

The bus sped off, while trying to escape, and hit another car with number plates LND340DF. The sudden stop made the policeman, who was hanging on the bus, to fall.

An eyewitness told Vanguard that as the cop fell, a trailer ran over him, killing him instantly, as the commercial bus driver and his conductor took to their heels, abandoning the vehicle.

Vanguard gathered that the driver of the car, which the bus driver hit, was travelling for his father’s burial when the incident occurred.

Operatives of Federal Road Safety Corps, FRSC, Lagos State Traffic Management Agency, LASTMA, and policemen from Trinity and Orile Divisions were there to ensure free flow of traffic as onlookers besieged the area.

A passenger in the bus, Rotimi Baki, said: “The policeman jumped into the commercial bus while the bus was moving and picking passengers at the bus stop.

One of the police officers, Sergeant Samuel, from Trinity Divisional Police Station harassed, dragged and seized Vanguard reporter’s mobile phone, accusing her of celebrating the death of his colleague.

All pleas to get back the phone fell on deaf ears as the officers kept shouting ‘I will deal with you. Who gave you authority to take pictures? You must come to our office’.

When she eventually got to their office, the Divisional Police Officer called the officer, who seized the phone, and returned it to the reporter.

Later, officers from the Trinity Police Division took the corpse of the Policemen to Orile Police Station and later to Mainland Hospital Mortuary, Yaba.