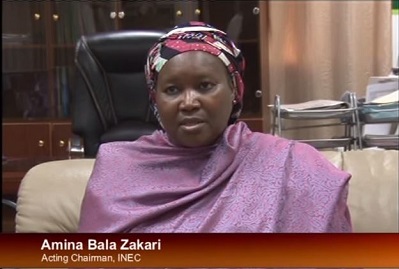 Acting Chairperson of the Independent National Electoral Commission, Mrs. Aminat Zakari, has said that the commission is awaiting the outcome of police investigations into bribery allegations against some resident electoral commissioners and other staff of the commission.

Zakari, who disclosed this in an interview on Friday in Abuja, also denied claims that she got the position as INEC acting chairman on the basis of her being President Muhammadu Buhari’s in-law.
She confirmed that security agents and INEC had received petitions against some RECs, but refused to disclose the number and identities of the commissioners involved.

Reacting to bribery allegations against some RECs, she stated, “Everybody makes allegations about bribery, or about somebody being bribed. Anybody can make the allegation, unless it’s proven by the security agencies or the court, INEC does not take action”.

On those that had been picked up by the security agencies, the INEC boss stated, “Unless they (security agencies) give us anything in writing, we just leave it as it is until their investigations are over”.

Zakari, who dismissed insinuations that she could not effectively perform as INEC Chairman because of her gender, said she has the capacity and has been tested and trusted with sensitive positions in the past.

“I am a human being first. I have the capacity. If I have the ability to do something and there are ways and means of achieving your targets. You don’t rely on your brain alone. You have other people to rely on. I have done administration. I have worked in organisations that demand accountability”, she said.

The INEC acting chairman explained that she was not appointed a national commissioner in INEC by Buhari, but rather, she was appointed by former President Goodluck Jonathan.

“I can’t say the General (Buhari) is my in-law. I am not married to his son. My daughter is not married to him. That is what I understand about being an in-law, but obviously, in life, you have acquaintances, people you have known”, she explained.

Adding that Buhari was not known for nepotism, Mrs. Zakari said, “God decides who becomes (a) leader; if God decides I would be the one to continue, I will have to do my best”.

Hinting that she had already prepared to leave INEC at the end of her tenure as a commissioner, Mrs. Zakari said: “I did not lobby for it (acting chairmanship). I had packed all my things out of INEC; I wanted to leave on the 30th (of June).

She also disclosed that the commission had sent some staff from its headquarters to Rivers State to assist in sorting out documents demanded by the state electoral tribunal.