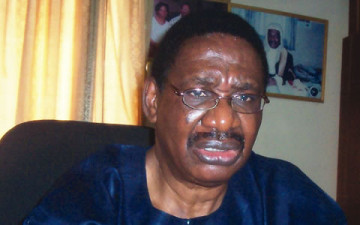 Foremost constitutional lawyer and chairman of the newly constituted Presidential Advisory Committee on Corruption, Prof. Itse Sagay (SAN), has expressed the determination of the committee members to do their work diligently and be responsible to the Nigerian people.

Sagay dropped the hint yesterday while speaking with Daily Trust in a telephone interview.

According to the human rights activist, it is important for all Nigerians to support the administration of President Muhammadu Buhari in its fight against corruption.

“All of us have a responsibility to assist this government to fight corruption which is the greatest scourge confronting this country today. Although, I can’t give you any detail now because we are still meeting, it is when we have met and taken a decision that I would be able to tell you what the committee’s decision is. But one thing I can tell you is that we are very committed. We are extremely committed to the Nigerian people in combating the scourge of corruption”, he said.

Responding to claims in some quarters that his appointment was meant to compensate him for his support and subtle campaign for Buhari and the All Progressives Congress during the last general elections, Sagay said he was not bothered by such criticism as those peddling the false claims are the same people the anti-graft agencies are preventing from crippling the country.

“Some people will not do anything to better the society. They lack patriotism. I am not surprised about their criticism at all. They are always concerned about themselves; self, self, self. I have no time for them”.