Ritual killers are on the prowl in Ogun State. Last Sunday, they killed a commercial sex worker identified as Sitira. SAMUEL AWOYINFA X-rays the incident. 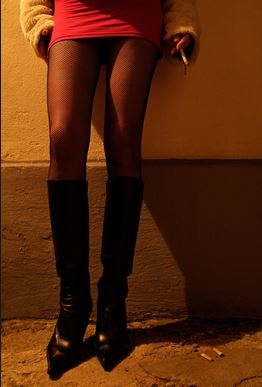 It was some few minutes past 9pm last Monday. The location was the frontage of Iwe Iroyin, the secretariat of the Nigeria Union of Journalists, at Oke Ilewo area of Abeokuta, Ogun State.

The two restaurants in the premises brimmed with fun lovers who were unwinding after the day’s work. Music blared from the speakers in one of the restaurants as cars were driven into the premises.

Suddenly, a dirge was heard from a distance. There was pandemonium as everyone rushed towards the main entrance to know those singing. It was a spectacle. They wept, sang and cursed. On a closer look, many of the on-lookers identified the ladies as the commercial sex workers who are regular callers to the secretariat and its environs.

The group of commercial sex workers held the candlelight procession in honour of their colleagues murdered by an unknown customer. The victim was identified as Sitira.

During the procession, they ventilated their grievances on the spate of the killing of prostitutes in Abeokuta for ritual purposes.

Sitira, 23, was said to have been murdered last Sunday by suspected ritual killers while her remains were dumped at a refuse site. Eyewitness said her remains were dropped from a moving Sport Utility Vehicle at Oloomore junction, Abeokuta in the early hours of that fateful day.

A chunk of flesh was severed off her right arm by her killers. The protesting sex workers, numbering about 50, identified their slain colleague with different names such as Titi and Folake.

They later departed for the MKO Abiola International Stadium, Kuto, Abeokuta, another spot where they ply their trade to continue mourning. Speaking with journalists, some of them claimed that aside Sitira, another colleague was killed in the same manner and her mutilated body was discovered in a ditch at the same Olomoore, Abeokuta.

They stated that they were not unaware of the antics of the suspected ritual killers who are currently on the prowl, and they would do anything to check their activities.

Our correspondent, who posed as a customer spoke to some of them at Iwe Iroyin and the MKO Abiola International Stadium, Kuto.

They expressed anger about the development, vowing to go diabolical to bring the suspects to book.

For someone like Ajike (not her real name), no amount of money would make her follow any ‘client’ to his home again.

“I have vowed that nothing would make me follow any customer home again. That is why they have been able to kill some of us for rituals. It’s either they follow me to where I stay or we go to a hotel. If our dead colleagues had brought these men to the places we operate (hotels), this wickedness would not have taken place,” she said.

Another prostitute, who identified herself as ‘Tee baby,’ expressed grief over the death of their colleagues. While hitting her hands on her chest, she said she was ready to challenge any ritual killer who crosses her path.

She said, “Any ritual killer, who attempts to take my life will be punished. If he thinks that I am a prostitute and has no worth, I am going to make sure he does not live to tell his own story. I am saying it now and confirming it, that as far as we are concerned here in Stadium, my babes (colleagues) are ready for them. They should come with their charms. We will deal with them. I will no longer follow anyone to anywhere other than a hotel. Now, we are potent as a bomb.”

Abimbola, another sex worker, told our correspondent that she saw Sitira being driven away in an exotic car the night she was murdered.

“She was with another prostitute and they entered one fine car that night. I was shocked to learn that Titi was dead. In fact, I have decided to fortify myself spiritually since this is the only job I do and I have not been able to secure any good job aside prostitution.

“But as far as they cannot get me a job, they cannot stop me from prostitution. The only thing they have succeeded in doing is that they have called my attention to the fact that I am too far from my spiritual fathers and mothers. Anyone who knows any ritual killer should let them know that it is payback time. They should come with their charms, we are ready for them.”

Sidikat who is also a prostitute preferred to rain curses on the ritual killers who murdered her colleagues. She said, “None of them will live up to old age, and they shall use their own hands to bury their own children.”

She added, “I will however be more cautious of the men I follow to hotels. But any of them nursing any evil thoughts will meet their waterloo with me. I am set to do the unthinkable with them. I know they (ritual killers) will still come around, but they should remember that every day is for the thief, one day will be for the owner. I will not say more than that.”

The Ogun State Commissioner of Police, Abdulmajid Ali, on Thursday read the riot act to ritual killers, cult members and other criminals in the state.

Ali stated, “I have told my men to shoot any cult member or ritual killers caught in action. We will no longer tolerate all these killings.