Members of the Port-Harcourt branch of the Nigerian Bar Association (NBA), on Monday disrupted a session of the law body’s annual conference over an invitation extended to former Rivers State Governor, Rotimi Ameachi to address them. 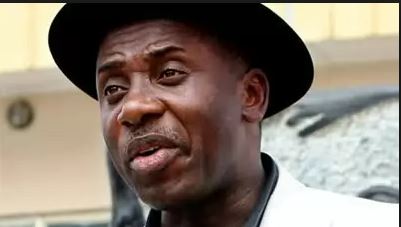 The placard-carrying protesters opposed Ameachi’s presence on the ground that Amaechi’s government shut courts in the state for one year during his tenure.

The protest degenerated into brawl when Ameachi, who was the co-chairman of the session, wanted to speak and another group of lawyers challenged the protesters.

For about 30 minutes, the NBA President, Augustine Alegeh (SAN) and security personnel had to plead with the protesters before order was restored and the continuation of the session, tagged: ” Public perception of lawyers; is the esteem justified?”

Expressing his disappointment, the chairman of the session, Governor Adams Oshiomhole of Edo State, said: “It is sad that people who claimed to be learned gentlemen are irresponsible.”

Oshiomhole added: “This is the height of irresponsibility, lawyers shouting like touts. My privileges have been violated, the rules of the professional conducts thrown to the dust bin. I could not differentiate between the touts in motor park Benin City and the lawyers”.

Oshiomhole said that the scene must have been one of the most embarrassing moments for the Chief Judge of Kogi State, Justice Nasiru Ajana, who presented the lead paper.

In his remark, when he was allowed to continue, Ameachi said that while the disruption lasted he was telling his lawyer that it was politics and whether it would be proper to get others to disrupt any similar speech by his successor, Nyesom Wike.

While stating that the public perception must be taken seriously, Justice Ajana said that reputable lawyers all over the world are known for promoting fundamental rights.

Also in their contributions all the speakers agreed that negative public perception of lawyers erode confidence in the judicial system. They advised the lawyers to check the high legal fees and use their position as lawyers to improve the society.