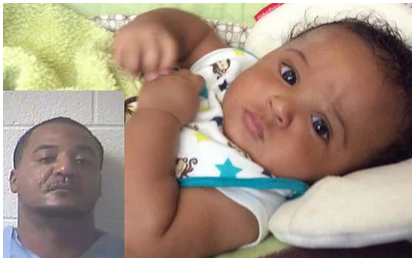 According to reports by Emirates24/7, Cox kept hitting Jayceon using his hands while he was driving on Thursday, August 6, 2015 in Radcliff, about 40 miles southwest of Louisville. A witness, Dena Stevenson,  made it known that the baby who was in a car seat in the front passenger’s seat got hit by Cox several times.

Dena Stevenson and her husband were however said to have been worried with the way the baby was being treated. They decided to call 911. When Cox dropped Jayceon at his mother’s home, he was not breathing and he did not have a pulse. The baby was taken to the hospital but Jefferson County Deputy Coroner Robert Fraction told The Associated Press Sunday that Jayceon died of an “inflicted traumatic injury to the head.”

Cox has been charged with murder.

Meanwhile, a 25-year-old man, Azeez Ahmed was reportedly killed with a charm at Ifo, in Ifo local government area of Ogun state on Sunday, August 2.