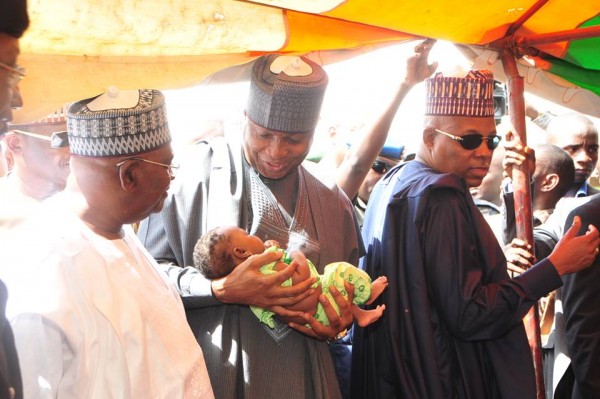 The Senate yesterday debunked speculations in some quarters that Senate President Abubakar Bukola Saraki’s visit to Maiduguri, the Borno State capital, was an underground launch of his 2019 presidential campaign.
A national daily yesterday reported that Saraki’s visit to Maiduguri was part of his plans for the Presidency in 2019.
The Senate president had on Monday led some senators to Maiduguri, where he met the Shehu of Borno, the state governor and some displaced persons and donated N10m to their welfare on behalf of the National Assembly.
Reacting to the report, Chairman of the Senate Ad Hoc Committee on Publicity, Senator Dino Melaye, said the visit had no bearing to 2019.
“It is myopic to say the visit has a link with 2019. The visit was not the making of the Senate president but the resolution of the Senate during a plenary last week. The visit has nothing to do with the ambition of the Senate president,” he said.
According to Senator Melaye, the Senate president is working hard to find means of assisting the victims of the Boko Haram insurgency.
“The visit was as a result of the motion moved by Senator George Thompson Sekibo of Rivers East Senatorial District on the Boko Haram insurgency. It was during the debate at the floor that Senate resolved that a delegation led by the Senate president should visit the North East states”, he said.
Melaye stressed that the Senate would be responsible and will only do what is in line with the law.
Meanwhile, Melaye said that President Muhammadu Buhari has so far performed well in piloting the affairs of the country.
“Buhari is driving within the speed limit unlike the previous administration that was over speeding, driving 140 Km per hour and at the end of the day, they grounded the vehicle”, he said.