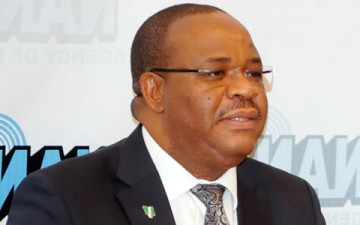 The immediate past Minister of Works, Arc. Mike Onolememen, has denied the allegation by Governor Adams Oshiomhole of Edo State that the Goodluck Jonathan-administration paid the sum of N140bn to consultants for the construction of the Second Niger Bridge.

The ex-minister, who made the denial in a statement signed by his media aide, Mr. Tony Ikpasaja, on Thursday, accused the governor of misleading Nigerians with “wild and spurious” allegations.

The statement noted that the Second Niger Bridge was a Public Private Partnership project being executed on the Design, Build, Finance, Operate and Transfer model at the cost of N108bn and that only N10bn, out of the refundable N30bn funding from Federal Government, was paid through the Subsidy Reinvestment and Empowerment Programme.

The statement reads in part: “The Federal Government of Nigeria, guided by the Transaction Adviser, Roughton International, agreed to provide a refundable Catalytic Funding of N30bn. By May 2015, N10bn Catalytic Funding was paid from the Federal Ministry of Works’ SURE-P Budget to fast-track the early and sub-structural works of the bridge. This implies that the successful concessionaire, JB-NSIA Consortium, has responsibility for the design, finance and construction of the project, as well as its operation.

“The total project cost is N108bn (excluding duties and Value Added Tax) with a completion period of about 48 months. This cost was arrived at, after BPP’s (Bureau of Public Procurement) review of the concessionaire’s submitted cost of N138bn.

“The bridge located at about 2km downstream the existing Niger Bridge in Onitsha, has recorded impressive progress. One wonders therefore, the intentions of Governor Adams Oshiomhole in deliberately misinforming Nigerians on the true status of the 2nd Niger Bridge”.

While challenging Gov. Oshiomhole to disclose his source of information on the said amount, Mr. Onolememen also asked him to apologise to Nigerians for the false claim.

He expressed disappointment in Oshiomhole, saying “As a senior public officer in the rank of a governor, it is expected that the comrade governor would have cross-checked his facts before jumping to make such wild and spurious allegations. Otherwise, Governor Oshiomhole should tender unreserved apology to Nigerians for misleading the public on this project”.