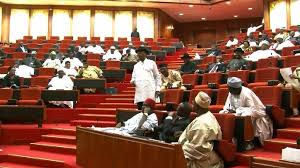 The Senate Leader, Sen. Ali Ndume, said on Sunday that the senate would introduce e-legislation to engender “robust and effective debates” at the National Assembly.
Ndume told the News Agency of Nigeria (NAN) in Maiduguri that electronic legislation was part of the initiative of the new leadership to make the National Assembly more vibrant.
“We are trying to make this National Assembly different from the previous assemblies by introducing reforms and accountable leadership”.
He said that the present senate had unfolded some legislative agenda at the beginning to set out its goals and objectives.
“We started by unfolding a legislative agenda, which clearly spelt out what Nigerians should expect from us, the essence is to make the National Assembly more vibrant.
“This time around, we are going to have a more proactive and more vibrant senate and House of Representatives”.
He said that the reforms had started yielding dividends as the pattern of debates on the floor of the senate had changed for the better.
“If you have followed our recent debates in the senate for example, you will notice a remarkable difference from the past.
“The procedure of our debate has changed unlike in the previous senate when debates were just anyhow; the discussions have been restructured to keep Nigerians keeping abreast.
“By the time a debate is going on you as a Nigerian will be able to follow and even take side”.
Ndume said that the senate had started using e-mails to send order paper of the senate to senators.
“In the past, senators only got ideas of the day’s legislative business when they picked the order paper at the chamber.
“This makes it difficult for them to contribute effectively in the debate on the floor.
“But we changed that now, we have started sending the order paper to senators, using their e-mail addresses and this is done early enough to prepare them for active debate”.
Ndume expressed regret that majority of the senators had not yet acquired literacy in ICT, saying that this handicap would hinder the efficiency of the system.
“We are facing some hitches in this direction as some senators are not ICT compliant. But we will move on as time goes by”.
Ndume said, however, that the order paper was being delivered manually to senators who were yet to be ICT literate, pending when things would change for the better.
“Every evening, senators receive the order paper for the next day’s sitting either through e-mail or manually and get prepared.
“Each senator will be able to prepare and organise himself for the debate if he is interested.
“We have also created platforms for senators interested in contributing to debates to signify their interest online to the senate president”.