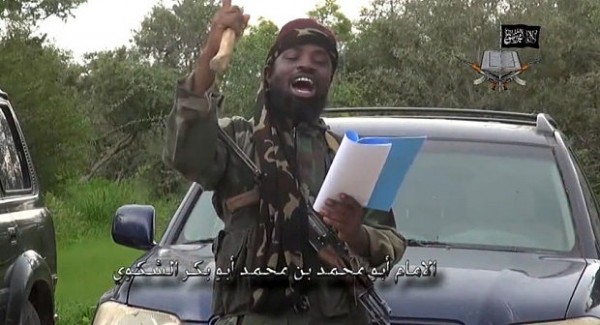 Nigeria’s most elusive criminal and leader of the blood-thirsty terrorist group Boko Haram, Abubakar Shekau, has resurfaced.
The terrorist leader declared once more that reports he had been killed, deposed or badly injured were false.
In an eight-minute Hausa-language audio message released Sunday and confirmed by security experts to be that of the Boko Haram leader, Shekau rebuffed the statements by President Idriss Deby of Chad that he had been replaced and called the Chadian leader a “hypocrite” and a “tyrant”.
“It is indeed all over the global media of infidels that I am dead or that I am sick and incapacitated and have lost influence in the affairs of religion”, he said in the recording released on social media.
“It should be understood that this is false. This is indeed a lie. If it were true, my voice wouldn’t have been heard, now that I am speaking”, he added.
Deby had last week while speaking with journalists in N’Djamena on the occasion of Chad’s 55th independence anniversary, said the terrorist group is now led by a new member who is open to talks.
“There is someone apparently called Muhamat Daoud, who is said to have replaced Abubakar Shekau and he wants to negotiate with the Nigerian government. For my part, I would advise not to negotiate”, Mr. Deby said.
The Chadian leader had also declared that the group had been “decapitated” with pockets of Boko Haram fighters scattered throughout east Nigeria, on border with Cameroon.
“The war will be short with the setting up of the regional force. It will be over by the end of the year”, he said.
But Shekau rubbished those claims saying “Gratitude be to Allah and with his help, I have not disappeared. I am still alive and I am not dead. And I will not die until my time appointed by Allah is up”.
The SITE Intelligence Group verified the authenticity of the message, and an AFP correspondent with extensive experience of reporting Boko Haram said it exactly resembled Shekau’s voice in previous recordings.
The terrorist leader’s absence from Boko Haram videos in recent months fuelled speculation that he might have been killed or wounded as the last time he spoke publicly was on March 7, 2015 when he pledged allegiance to the Islamic State (IS) in an audio recording.
Shekau also refers to himself in the new recording for the first time as “leader of the west Africa wing” of IS and pays homage to its leader Abu Bakr al-Baghdadi, referring to him as the “Caliph of Muslims”.
He mocked President Muhammadu Buhari, who only last week, while decorating the service chiefs with their new ranks, gave them a marching order to end the insurgency within three months.
“This ostentatious person, a liar – I mean Buhari, who raised arms to crush us in three months. You Buhari, why didn’t you say in three years?” Shekau demanded.
“We will certainly fight you by the grace of Allah until we establish Allah’s law everywhere on Earth”, he declared.