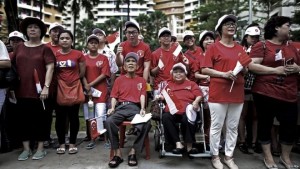 Singapore is holding nationwide events to mark 50 years since it became an independent state. Tens of thousands of people are expected to attend an outdoor parade, complete with flybys by the air force and a Singapore Airlines A380 airliner.

Singaporeans are also being asked to join together in reciting the national pledge and singing the national anthem. Singapore became independent when it was ejected from the Federation of Malaya amid social unrest. In 50 years, the former British colony has transformed itself into one of the world’s wealthiest countries.

But its critics say the rapid development has been accompanied by a strict control on free speech and politics. The city state celebrates its independence day in style every year, but this year’s SG50 events are being billed as the country’s biggest ever celebration, with months of build-up in shops, schools, work places and in the media.

One student, Yang Jie Ling, told Reuters news agency: “It’s only 50 years for a small nation like us, so we have achieved so much. It’s a year that Singaporeans will want to remember forever.”