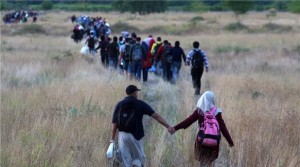 Hundreds of refugees have passed through the Macedonian border from Greece unhindered a day after police used stun grenades in a failed bid to prevent them from crossing. Al Jazeera’s Andrew Simmons, reporting from Gevgelija on the Macedonian side of the border, said the refugees were boarding trains to take them from Macedonia to Serbia.

The refugees hope that by taking trains through Serbia, they will make it to Hungary and other EU member states.

Al Jazeera’s Jonah Hull, reporting from Idomeni on the Greek side of the border, said the railway between the two nations was working again on Sunday.

“It is calm here. There is a free flow of movement as the Macedonian police allow small groups through,” he said.

“There are lines and lines of refugees making their way to this point and there is no sign in the bigger picture that this flow is going to stop or slow down anytime soon.”