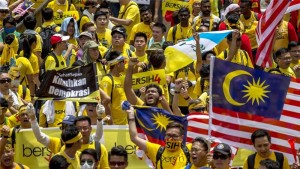 More than 50,000 people are protesting in Malaysia’s capital to demand the resignation of Prime Minister Najib Razak, who has weathered public outrage over a multi-million dollar payment made to a bank account under his name.

The protesters gathered at five designated areas in the Malaysian capital on Saturday ahead of a planned march towards the city’s Independence Square, which has already been blocked for national celebrations on Monday.

Kuala Lumpur authorities banned the two-day rally organised by the pro-democracy group, Bersih, setting the stage for a possible showdown with security forces.

The activist group has also called for rallies in the cities of Kota Kinabalu and Kuching on the Malaysian side of Borneo.