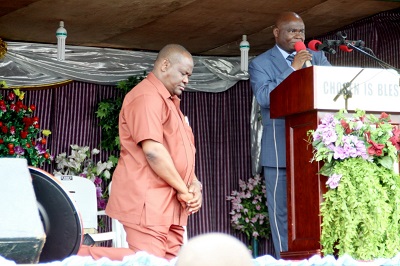 Governor of Rivers State, Chief Nyesom Wike, has declared that those planning to truncate the lifespan of his administration will be disgraced by God at the end of the day.
He said that his administration by virtue of strategic planning, had confounded those who claimed that road construction could not take place at the height of the rainy season.
In his address to a congregation at the Lord’s Chosen Renewal Charismatic Ministry in Port Harcourt on Sunday, Wike said that his victory at the governorship elections was ordained by God and made possible by the prayers of clerics, including pastors of the Lord’s Chosen.
“Those who are fighting and plotting to truncate the lifespan of the mandate freely given to me by the people of Rivers State will be disgraced by the God of the Lord’s Chosen.
“The way the God of the Lord’s Chosen did it on April 11 that is how he will do it again”, the governor said.
Wike recalled that it was at the same grounds of the ministry that he made a vow that if the rumour that he belonged to a cult was true, he should not win election.
He noted that he went ahead to win the governorship election to prove that the rumour spread by the opposition was false.
According to him, “If you recall, I did say that if I belong to a secret society, I should not win the governorship elections of Rivers State.
“By the special grace of God, the pastor prayed for me before the congregation, he prayed for me in private, and he has been praying with me. To the Glory of God, the elections came and God Almighty triumphed”.
He also directed the immediate commencement of the construction of the road leading to the Rivers State headquarters of the Lord’s Chosen Renewal Charismatic Ministry.
Wike also directed the interlocking of the premises of the church in line with the promise he made to the Church faithful during the campaigns.
According to him, both projects will be completed before September 7, 2015.