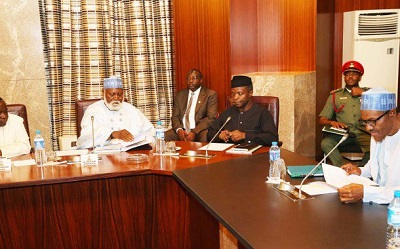 The Publicity Secretary of the All Progressives Congress, APC, in Lagos State, Mr. Joe Igbokwe, has challenged the National Peace Committee, led by former Head of State, Gen. Abdulsalami Abubakar (retd.), to tell Nigerians why President Muhammadu Buhari’s administration should not probe the past government of Dr. Goodluck Jonathan.

In his opinion piece sent to journalists on Friday, titled, ‘Away with this peace committee’, Igbokwe urged the committee not to “blackmail and intimidate” Buhari and the governing APC.

He quoted a member of the committee and Bishop of the Catholic Diocese of Sokoto, Bishop Mathew Kukah, as saying, “I think what we are concerned about is the process. It is no longer a military regime and under our existing laws, everybody is innocent until proven guilty”.

The APC spokesman pointed out that Kukah said this when members of the committee visited Buhari on Tuesday.

While questioning the motive behind the committee’s visit to the president, Mr. Igbokwe asked if it had become an offence to investigate past leaders and bring them to book, when necessary, wondering what the reason could be for “this dangerous mediation at a time like this”.

Igbokwe said, “A friend tells me that the rampancy of corruption in Nigeria is a function of low intelligent quotient (IQ) on the part of all of us. Can the members of the Peace Committee be exonerated?

“As it were, I found nothing wrong in the Peace Committee visiting the President because any credible group is free to visit the President since the President is for everybody and for nobody in particular.

“What I am worried about is the timing and the motive of the visit. I am deeply worried about the purpose of this visit. Is it to shield some people from the investigations on corruption going on in almost every critical sector of our economy? Is it to try to circumvent a clinical process being put in place to put things in order in Nigeria?

“Is it to try to slow down President Buharis’s agenda to rid Nigeria of corruption? Is it an attempt to intimidate the President to slow down and let the corrupt, who pillaged and plundered our common patrimony, to go scot-free? Is it a blackmail to render nugatory APC’s agenda to bring the change it promised Nigerians?

“Are the peace committee members not aware of the sordid roles some members of the committee played during President Jonathan’s tenure? Why these crude interventions at a time like this? Is the Peace Committee working to protect Jonathan and his cronies and shield them from facing the jury?”