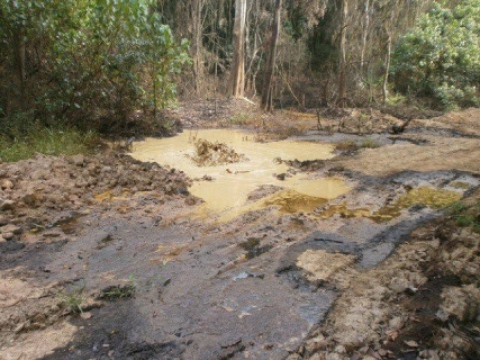 Total E&P Nigeria Ltd (TEPNG) said it has stopped exploration of crude on its Obagi-Rumuekpe 12 Oil Export Pipeline in Rivers State following an oil spill. The company suspects the spill was caused by pipeline sabotage.

This will be the second time in a matter of months that the pipeline will be attacked, the first being in May this year.

The Obagi field produces about 35,000 barrels of oil equivalent and 6 million cubic metres (212 million cubic feet) of natural gas per day. However, it is uncertain how much production has been shut in from the field due to the line break, as the company is yet to gain access into the area reputed for its high security volatility.

“The volume of oil spilled and area of impact have not been estimated in view of the highly volatile nature of the area and the security concerns,” a statement from Total, yesterday, read in part: adding that the relevant authorities have been informed.

Total also said in the statement that the spill was discovered “during crude oil expedition operation on August 16, 2015, an abnormal situation was observed as the oil expedited from Obagi was not received at Rumuekpe metering station. Expedition was immediately stopped and a helicopter over-flight was carried out, which revealed oil spill and fresh excavations on the pipeline Right Of Way.”

Oil spills are described as the most difficult environmental disaster to remediate. This is in addition to the loss of livelihood of the locals, who are mostly farmers and attendant health hazards, a development that calls for increased monitoring of the pipelines to ensure their safety.

The Obagi field is located in Oil Mining Lease, OML 58, in which Total E&P is the operator with a 40 percent interest, alongside the Nigerian National Petroleum Corporation, NNPC with 60 percent.