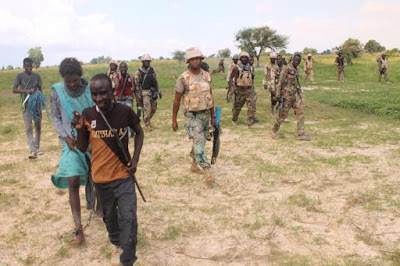 The Nigeria Army has said troops of the 7 brigade on operation Zaman-Lafiya Dole in the northeastern part of the country have cleared Gudumbali town in Borno state of Boko Haram terrorists.

However, a number of troops were killed, their weapons and equipment destroyed during the operation.
Colonel Usman recalled that the Nigerian Air Force has inflicted heavy damage on the terrorists’ camps within the general area last Monday.

He also said: “troops of 5 Brigade Explosive Ordinance Devices (EOD) unit, while advancing towards Dikwa, ran into landmines buried by the terrorists between old Marte and Kerenoa junction in Guzamala Local Government Area of Borno State”.

“Unfortunately, 2 soldiers lost their lives, while 2 others were critically injured due to the landmine explosion”, he added.

“Despite this sad event”, he said, “the troops are not deterred as they continued their advance and pursuing the terrorists to their enclaves in Sambisa forest”.