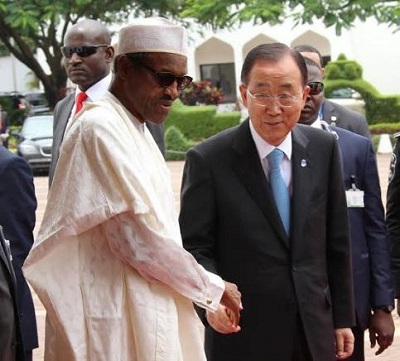 The United Nations Secretary-General, Mr. Ban Ki-Moon, on Monday demanded the unconditional release of the over 200 Chibok schoolgirls abducted in Borno State April 2014 and other abductees of the Boko Haram sect.
Ban Ki-Moon made the call while addressing State House correspondents shortly after holding a closed door meeting with President Muhammadu Buhari at the Presidential Villa, Abuja, as part of the activities lined up for his two-day visit to the country.
His call came the week the girls will be spending their 500th day in captivity and on the backdrop of calls by the Bring Back Our Girls advocacy group in Abuja for Mr. Ki-Moon to seize the opportunity of his visit to Nigeria to rally global support against terrorism in the country.
Co-convener of the Group, Mrs Obiageli Ezekwesili said the international community has limited its support both in the rescue of the abducted Chibok school girls and the fight against terrorism because the past administration was not serious with the fight.
However, on his visit to Buhari on Monday, the UN scribe commended the Nigerian president, who he said had embarked on an agenda for change in which he was prioritising security and anti-corruption war.
He promised the UN’s support for the president’s agenda, saying “When you change Nigeria, you have also changed Africa”.
Buhari on his part said they discussed the difficult time Nigeria had found itself during the meeting.
The president said the step was taken so that the UN could assist the country.
He thanked Ban Ki-Moon for extending invitation to him to attend the UN General Assembly holding in New York on September 27 and 28.
Mr. Ki-Moon will return to the Presidential Villa by 7pm for a dinner organised in his honour.