An eighteen year old admission seeker who was allegedly raped by a part-time lecturer of the University of Lagos, Mr. Akin Baruwa, has been offered a scholarship by the management of Adeleke University, Ede, Osun state. 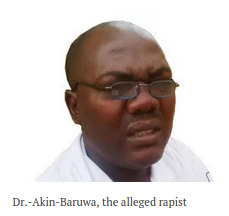 The police are currently investigating the allegations of rape brought against Mr Baruwa who was said to have raped inside a study room, the girl who was seeking admission into the University of Lagos, Akoka.

The rape incident has attracted huge attention from both the media and concerned persons and this informed the decision of the institution to come to the plight of the admission seeker.

Confirming the award of the scholarship to The Punch, vice chancellor of the institution, Prof. Oluwole Amusan on Wednesday, August 12, explained that the institution decided to take the step because the management was moved by the plight of the girl, who was allegedly raped in the course of her quest for a university education.

He said: “Giving out scholarships to indigent students is not new to us. Our founder had a foundation whose existence preceded the university, through which scholarships were given to students.

“Since the university was established four years ago, the tradition has continued.”

The father of the alleged victim also confirmed the offer of scholarship by the institution, and expressed gratitude to the management of Adeleke University.

“I was so happy when I was contacted. May God bless you so much for seeing the case through. I am so happy. Such scholarship would be a big blessing to my daughter,” he said.

The scholarship according to the institution authorities is meant to cover the four-year duration of Mass Communication, which the girl has chosen to study, a course which UNILAG has said she was not qualified for with her 211 score in the Unified Tertiary Matriculation Examination.

Meanwhile, a 28-year-old former student of the lecturer, has come out with a revelation of how she barely escaped being raped by the accused.