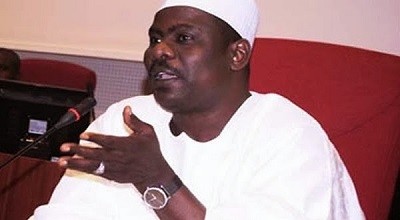 Senate Leader, Ali Ndume, on Thursday, confirmed his separate recent visits to President Muhammadu Buhari, and national leader of the All Progressives Congress, Asiwaju Bola Tinubu, but explained that it had nothing to do with the leadership crisis rocking the Senate.

Ndume, who made the clarification while speaking with some reporters in Abuja, said that the senate under the leadership of Senator Bukola Saraki, had put the issue of the leadership tussle behind it and was now focused on supporting the Buhari administration to tackle the various problems confronting the nation.

He also said he had been visiting both Buhari and Tinubu on regular basis in the last 12 years because they are his political mentors.

He said, “On my reported visit to Buhari, I am the leader of the eight senate. My duties are there: One, to lead the legislative business of the senate; Two, to prepare the schedules of the senate, and three, to liase with other committees.

“Yes, there are some issues we had after the inauguration of the senate leadership and all that, but as you can see we have put all those issues behind us and are moving forward.

“The president has communicated several times to the senate, who did he address the letter to? He writes not only to the senate president, but he puts Bukola Saraki. We have moved beyond that.

“Of course I go to the Villa frequently, because we compare notes on bills that are going to come including on these relationships”.

“We have been doing that in the previous leadership and that is what took us there recently and of course to improve on the relationship between the executive and the legislature.

“A newspaper reported yesterday when I was seen at Asiwaju’s place. Asiwaju is one of my mentors and of course the president, too. I have two political mentors: the President and Asiwaju himself.

“We have been with this president hoping for his presidency from 2003 in APP before it became ANPP. So, I am not a stranger to Buhari. I have been visiting him in Kaduna occasionally to interact with him.

“I have been going there before now for the past 12 years. So, my going to villa is not a new thing and so also is my visit to Tinubu. He is one of the people I respect and appreciate.

“During his 60th birthday, he invited 60 people that were close to him and I was one of them”, the Senate leader stated.

On the current probe of the Chairman of the Economic and Financial Crimes Commission, Ibrahim Lamorde, Ndume acknowledged that the Senate Ethics, Privileges and Public Petitions Committee had committed procedural errors but assured Nigerians that necessary steps would be taken to correct the errors

He said: “I think there were some procedural lapses there (Lamorde’s probe) but I don’t want to believe it was deliberate because there is no way you can cut corners or use the institution of the Senate to settle personal scores, it doesn’t work that way.

“After all, whatever decision you take has to be considered on the floor of the Senate and it has to be passed”.