Former Lagos State Governor, Mr. Babatunde Fashola has broken the silence over media reports alleging that he spent the sum of N78 million for the upgrade of the website – www.tundefashola.com during his tenure as governor.

According to a budget report on the website of the Lagos State Public Procurement Agency (LSPPA), the contract was awarded to Info Access Plus Limited.

Following mixed reactions that trailed the reports, Fashola in a statement on Thursday night, denied the allegation.

Fashola has come under serious scrutiny since it was suspected he could be one of the members of the APC President Muhammadu Buhari is considering for ministerial appointments. He was alleged to have fathered a set of twins outside wedlock, left Lagos state in huge debts and played a key role in the emergence of leaders of the National Assembly.

Read his full statement below:

“When you wrestle with a pig, the pig gets happy and you get dirty.”

This statement of profound wisdom informed my silence in the wake of manipulated and unsubstantiated allegations of wrongdoing recently being levelled against me. They started a few weeks to the end of my tenure, and have continued till date. They range from allegations of extra marital paternity of children, to mundane and phantom conspiracy in the National Assembly, a debt profile for Lagos State and lately a website upgrade contract of N78 million, which is being distorted.

In so far as the allegations of paternity are concerned, they are wicked and false. I have no biological children other than my two children. Of course, I adopted three children who became orphaned as a result of the tragic DANA Airplane crash of 2012 and the adoption followed due process.

Those who do not care whether they hurt innocent children or invade the privacy of other citizens in their mindless rage against me will have their rewards served upon them in the fullness of time. As far as my alleged involvement in the National Assembly elections are concerned, they remain only the products of the imagination of those who made the allegations.

I was out of the country at the material time and returned only in the early hours of that morning to Abuja, and from there proceeded to Lagos. As far as debts of Lagos State are concerned, the fact is that Lagos had always had debts. Her population is growing and for a long time she has run deficit budgets to cater to the needs of that growing population.

All the debts contracted in my time were approved by the Parliament in the annual budgets, some have been paid back and the financial status was healthy and stable when I left. The outlook for the state and her rating by Fitch was long-term foreign and local currency IDRs at ‘BB-‘, short-term IDR at ‘B’ and national long-term rating at ‘AA+(nga)’.

When we all pause to reflect and think, we will realise that there are a sizable number of companies who are running business, who have no responsibility for Security, Public Health, Public Education and other responsibilities of Government, who borrow more than Lagos State Government, whether collectively or individually. As far as the website contract is concerned, yes there was a contract. It went through procurement and was approved by the Government agency authorised to do so.

One of the services was an “upgrade” quoted for N12.5 million but awarded for N12 million. There were other services that were new; like a handover countdown clock, mobile Apps for Google, for IOS and ipad, for Microsoft, and for Research in Motion (Blackberry), which the existing website did not have, as well as the annual maintenance cost for managing the website. 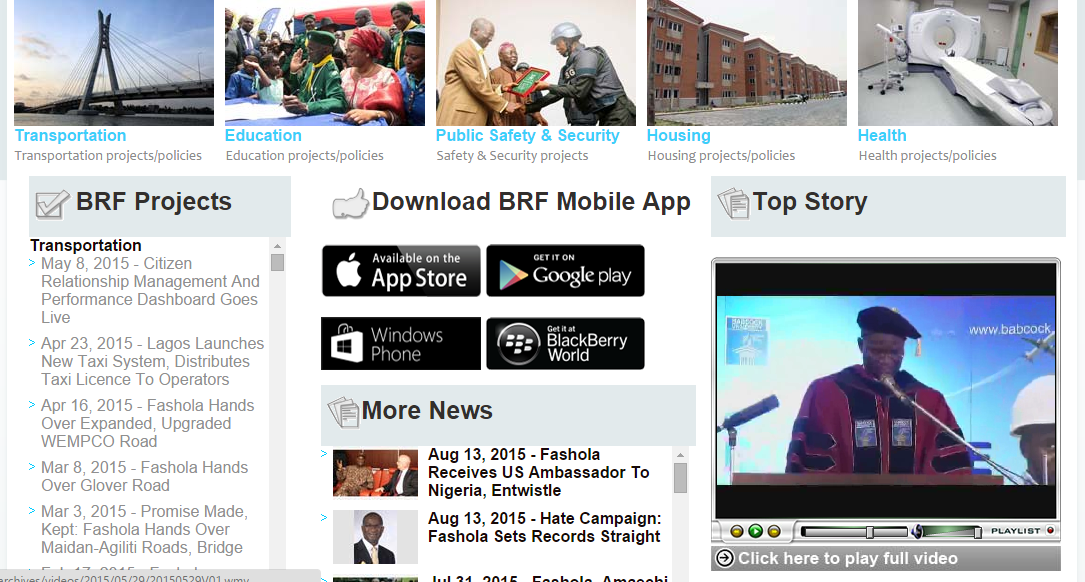 It was for all these services that the contract was issued for N78 million, which the Lagos State procurement agency gave a No Objection based on the advice of the Ministry of Science and Technology, who are the Government adviser on ICT matters. In publishing this Contract award which was the Government tradition under my watch, the procurement agency’s website summarised it as “upgrade” only without detailing the other services and this has been distorted by the agents of hate as their suspected “smoking gun”.

For those who are familiar with mobile Applications, they will know that users either pay for them online or download them for free. What is usual is that applications for service are usually provided to users free, but somebody bears the cost. Since these applications were to be made available to the public for free access and to assist Government communication, we decided to pay for them. The entire documents are with the Lagos State Government and are available for those who seek the truth.

For the record, since 2008, long before the Freedom of Information Act was ever passed, we had put out all our contracts on the State website because I believe people deserve to know. It is regrettable that a “summary” of the contract has been deliberately distorted to misinform the public. This particular website came into being as a result of the decision I made to make my telephone number public for the several thousands of people seeking to reach me daily.

The website that is now under attack helped me to do my job and to respond to citizens, and the contract was issued to run till my last day of office. It stands logic upside down for to “fraudulently” award a contract and then have it published on a website. To date, there have been 27.666 million hits on this website, with 1,844 videos, 34,381 photographs, 2,531 Press Releases and 595 Speeches, among other items of public communication.

I have chosen to make this personal response because as the head of government at the time of the transaction, the buck as they say stops on my desk and also because of the many calls, text messages and mails coming from many people seeking clarification and to prevent fiction from being mistaken for truth. I expect that there may be more distorted allegations without evidence, for reasons that remain in the realm of speculation, because, I have been informed reliably that large amounts of money are being paid to some of these agents to bear false witness.

I cannot conclude without responding to the crusade of CACOL and their ilk, seeking my prosecution on allegations that have no proof and writing “pre-emptive” letters to the Presidency. In case they are unaware, I am not looking for a job. I expect them to know that allegations of wrong doing are not resolved without evidence, neither are they resolved in press conferences.

I have served my state, and by extension, my country for Twelve and half years and I did so with my heart. I am taking the rest that I believe I have earned. For those who still wish to remain in the mud, they should look in the mirror. For those who wish to throw mud at me, they should look at their own hands. As for me, I have moved on. My job is done.