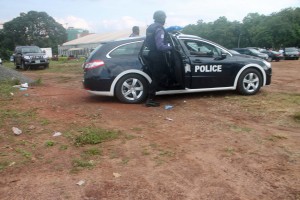 A gang of masked dare devil armed robbers at the weekend, unleashed terror on a bridal train at Mgbuishii, Ohaji/Egbema local government area of Imo State, killing the video camera man and badly wounded others, including the photographer in the process.:

Vanguard gathered that the newly wed couple (names withheld) were in Chimezie Catholic Parish, Mgbuishii, for the solemnization of their wedding and were on their way back to Owerri for the reception, when masked men suddenly jumped out of the nearby bush and attacked the bridal train. A villager, who spoke on strict grounds of anonymity, identified the dead video camera man as Mr. Isaac Ezirim, while the wounded photographer was Mr. Julius Ashigbu.

“The hoodlums first attacked the vehicle conveying the bride and groom. Although the bullets hit the video camera man and the photographer, the driver of the vehicle sped off”, the villager recounted. It was also gathered that having missed their target, the masked hoodlums descended on all the vehicles coming behind the couple. “The hoodlums robbed the friends and relations of the couple of cash and other personal valuables, including telephone handsets”, the villager said.

A close friend of the couple told Vanguard that the wedding, which was taken to the home of the groom, was eventful until the bridal train started moving to Owerri for the reception. “This ugly incident took place at the outskirts of Mgbuishii, a sleepy rural community that is now getting notorious for all manner of serious crimes”, a female villager lamented.