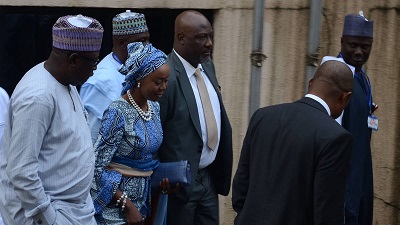 Senator representing Kogi West Senatorial District, Dino Melaye, yesterday, explained why he accompanied Toyin, wife of the Senate President, Bukola Saraki, to the headquarters of the Economic and Financial Crimes Commission, EFCC, last Tuesday because he wanted to know the level of culpability in the allegation against her by her petitioners.
Melaye, who is the Chairman, Senate Ad-hoc Committee on Media and Publicity, said he only went to the EFCC office in his capacity as an independent investigator.
The lawmaker, who is founder of the Anti-Corruption Network, said in a press statement, in Abuja, that his explanation became necessary, following the barrage of attacks and criticisms he had so far received from his “brothers, sisters and fellow citizens” since Tuesday, when he was sighted accompanying the former Kwara State first lady to the headquarters of the commission in Abuja.
Melaye, who said he had no regret nor apology to anyone for his action, also debunked insinuations in some quarters that he may have been one of the beneficiaries of the contracts in which Mrs. Saraki was being accused of misdeeds.
He said he had never executed any government contract, either at the local, state or federal government level in his life, and challenged anybody with proof to the contrary to step forward with it.
Melaye, in the statement entitled: “Stand up for what you believe in regardless of the popularity or acceptance of your belief”, also revealed that his visit to the commission’s office along with the wife of the Senate President was a personal sacrifice aimed at preventing the commission from being compromised through influence by desperate politicians.
He said: “The invitation of Mrs. Toyin Saraki by the EFCC, however, is not a criminal indictment. I will not abandon my friend because of mere EFCC invitation. I also went there as a private investigator and an anti-corruption crusader to find out the extent of culpability of my sister and friend since she was not told the content of the petition against her before her appearance before the EFCC”.