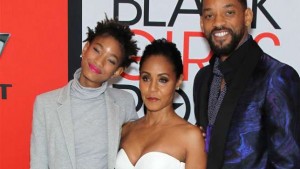 Young promising starlet, Willow Smith, has laughed off divorce rumors trailing her parents, shortly after actor and actress, Will and Jada Pinkett Smith shut down those rumours.

‘The media thinks my parents are getting divorced like every second hahaha!’

Jada also tweeted in response to Will’s statement that he wasn’t divorcing his ‘Queen’, saying ,’My King has spoken’.