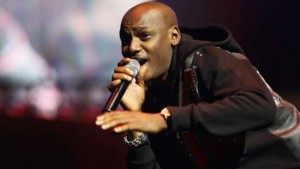 Nigerian superstar singer, 2face Idibia has revealed that since he walked down the aisle with Annie Idibia in April 2013, he has not received any sexual advances from any other women.

During a chat with MTV VJ, Stephanie Coker, on this week’s MTV Base Real talk, he said, ‘No, not at all, dem just free me’ when asked if he still gets advances from women since he got married.

‘What was the first big money you made when you first started out and what did you do with it?’

Hypertek boss replied, “The first big money I made was while I was with Plantashun Boiz. It was 300 thousand naira and the first thing I did was to take part of it and send to my parents. I did that before even buying a shirt or a shoe.”

2face who turned 40 today, also disclosed that his exit from his former label, Kennis Music was not borne out of negative circumstances.

He said, ‘My contract with Kennis Music expired and that was why I left, but before it did, I fulfilled all my obligations. I left because I wanted to start something on my own. There was no beef, it was just the end of my contract’ .