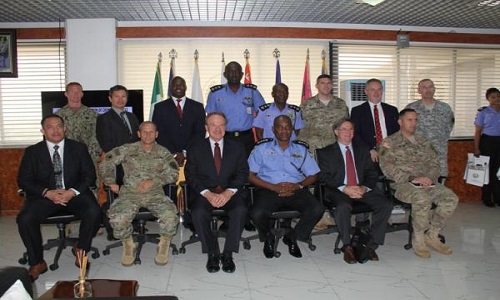 The Inspector-General of Police (IGP), Mr Solomon Arase, has reiterated the commitment of the Nigeria Police Force to sustain the fight against insurgency in the country.

This is contained in a statement issued by the Force Public Relations Officer, Olabisi Kolawole, in Abuja on Thursday.

According to the statement, Arase stated this when a delegation from the U.S. Embassy led by Ambassador Daniel Mozena, visited him at the Force Headquarters, Abuja.

“Our 4,000 operational policemen are working in partnership with the military to end insurgency in the North-East”, Arase said.

He said that a deputy commissioner of Police had been deployed to the Operations Command Centre in Maiduguri, Borno State.

The statement noted Mozena’s commendation to the police for its effort in upholding professionalism and the rules of engagement in the ongoing fight against insurgency in the North-East.

The U.S diplomat offered to assist the Force in handling the issue of terror suspects who may lay down their arms.