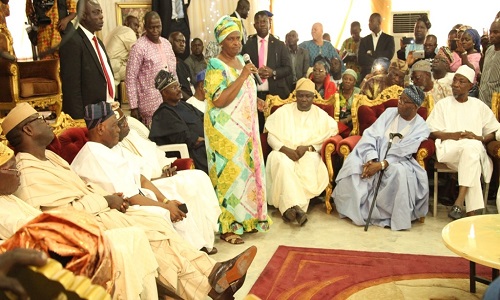 Mrs. Oyediran said she used to make it a point of duty to pray daily for a descendant of their father, who was the first premier of the old Western Region, to occupy the highest political office in the land, but stopped doing so at a point for reasons she did not know.

She made the declaration while receiving members of the Yoruba Council of Elders (YCE) led by former governor of the old Western Region, General Adeyinka Adebayo (retd.), which paid a condolence visit to the country home of the Awolowos in Ikenne.

The daughter of the late matriarch, however, expressed firm belief that one day her prayer would be answered.

In his remark, Gen. Adebayo praised the late Mrs. Awolowo for her invaluable contributions to the unity of Yoruba land, stressing that her life was worthy of emulation.

“Mama contributed to the unity of Yorubaland. She lived a remarkable life, worthy of emulation. Her lifetime is a lesson for the rest of us, to teach us how to live our lives”, he said.