30-year-old Lorraine Kekana was made to listen to the cries of her four dying children who had just had their throats slit, allegedly by their father, IOL news reports. 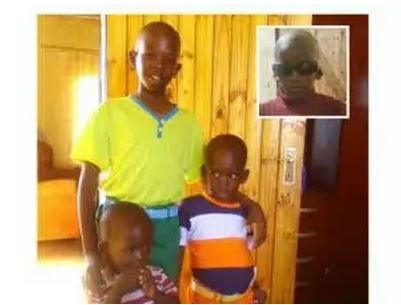 Minutes before, her husband had allegedly phoned her to ask whether she had any final words for her children before they died. The four boys, aged 13, 10, 6 and 4, were killed on Sunday morning Sept 6th at their home in Moletlane village in Limpopo’s Zebediela area South Africa.Two of the boys were killed inside the sitting room and the other two in their bedroom.

Sitting hundreds of kilometres away in Pretoria, Kekana dropped the phone in shock. Her husband can’t be named until he appears in court.

On Monday, Kekana couldn’t hold back the tears as she recalled the gruesome murder of her four boys. Moments after the phone call, Kekana phoned her neighbour and asked her to find out what had happened.

He was later found in his bedroom with injuries to his throat in what appeared to be a failed suicide attempt. Limpopo police spokeswoman Colonel Ronel Otto said the 36-year-old man was recovering in hospital under police guard. “As soon as he is well enough, he will appear in court on four counts of murder,” said Otto.

On Monday, Kekana lamented her tragic loss. She had earlier cried out aloud when Limpopo Safety MEC Mapula Mokaba-Phukwana, who had visited the family, spoke to her. Speaking to The Star later, she said:

“I’m numb. No amount of tears will bring back my children. How am I going to live in this house all alone? I had never prepared to bury all my four children at once.”

Kekana said her husband had phoned her earlier to tell her he wished he had crashed his car – with the children inside – into a a truck. She said that on Saturday night he had driven with their children from Pretoria after his uncle had successfully mediated a domestic dispute between them.

“When he left, we had resolved our dispute and we were all happy,” said Kekana.

Or so she thought. Her husband had arrived in Zebediela early on Sunday morning, after he had left Pretoria on Saturday night with other ideas.

“I wish him to recover from his injuries so that I can ask him why he killed my children.”

The couple had been married since 2009, and she described him as a cool-headed man. “He was cool. Although we had arguments, he never showed signs of aggression.”

The man’s father, Phineus Kekana, said his son was a churchgoing man. “I also wish him to get well and come back to answer for what he did,” he said. Mokaba-Phukwana said the government would help the family with their funeral arrangements.