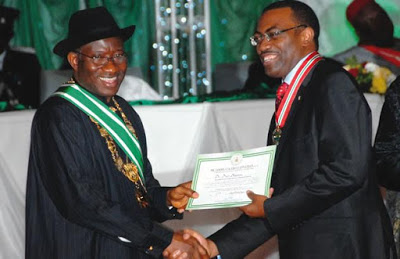 Former President Goodluck Jonathan has congratulated Dr. Akinwumi Adesina and Ms Arunma Oteh on their recent appointments into top positions in the African Development Bank (AfDB) and the World Bank respectively.
These appointments, Jonathan said, are a pointer to the fact that his administration had a good economic team that managed the affairs of the country.
Akinwumi, who was Minister of Agriculture and Rural Development under the Jonathan administration was commissioned last week as President of the AfDB, while Oteh, who had a turbulent tenure as Director-General of Securities and Exchange Commission under the same government, was appointed as the Treasurer and Vice President of World Bank.
In separate letters of congratulations to both Adesina and Oteh, which he personally signed, the former president described them as high achievers and Nigeria’s worthy ambassadors.
On Adesina’s choice as AfDB chief, Jonathan said: “Given your exemplary record of performance, while serving as the Honourable Minister for Agriculture and Rural Development in my cabinet, I have no doubt that you will deploy your energy and the bank’s resources to ensure that Africa experiences a new era of accelerated development.
“You were not only a critical voice in my economic team, you also walked the talk, and earned the praise of our countrymen and women, by ensuring that Nigeria’s quest for self-sufficiency in food production became achievable dream.
“I am particularly pleased with your emergence as the AfDB boss; a development, I believe, has come as a reward for having served your country meritoriously”, the former President said, adding that “It also attests to the fact that my Administration had a good team that managed the affairs of the country”.
In the same vein, Jonathan, in a letter to Oteh, praised the former SEC boss’ profound knowledge of capital markets, describing her as being conversant with the challenges of the economies of emerging markets.
“I am delighted that you are going to your new job, fresh from the experience of having led the recovery and growth initiatives of the Nigerian Bourse in the wake of the decline, occasioned by recent global economic recession and financial crisis.
“I am particularly pleased that you are being rewarded and elevated on the world stage, after serving your country meritoriously, at a time I was the President. This is a clear testimony to your capacity, high integrity, and tenacity of purpose. It is also a vindication of the decision of my Administration to stand by you, believing in your
abilities and competence, even when questions were being raised in some quarters over your choice.
“I am convinced that the experience you gathered as Director-General of the Securities and Exchange Commission of Nigeria (SEC) gave you deep insights on how to tackle the peculiar challenges of a developing nation. The World Bank can draw from this to ensure that its future partnerships with emerging economies in Africa and other parts of the world are anchored on policies that will lead to sustained growth and development, which is a sine qua non for lifting millions of people in the developing world out of mass poverty”, Jonathan stated.