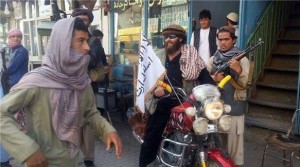 Afghanistan has mobilised military reinforcements for a counteroffensive to take back Kunduz, a day after Taliban fighters overran the strategic northern city in their biggest victory since being toppled from power in 2001.

According to Aljazeera, Tuesday’s mobilisation came as the US carried out its first air strike on Kunduz, capital of Kunduz province.  US Army Colonel Brian Tribus, spokesman for the US and NATO missions in Afghanistan, said the raid was conducted “in order to eliminate a threat to the force”, though there were no foreign troops left inside the city.

Afghan security forces have retreated to the outlying airport, leaving the Taliban effectively in control of Kunduz after they stormed the city, capturing government buildings and freeing hundreds of prisoners. Scores of unidentified bodies littered the streets after hours of heavy fighting on Monday, according to local residents, many of whom were making a hasty exit from Kunduz, some by road while others headed to the airport.

As of 11:30am on Tuesday, hospitals in Kunduz province had received 16 fatalities and 172 injured, Wahidullah Mayar, an Afghan health ministry spokesman, told Al Jazeera. Al Jazeera’s Qais Azimy, reporting from Baghlan, just south of Kunduz, said government troops attempted to re-enter the city but were foiled by intense gun battles.