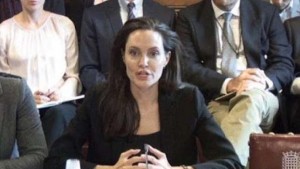 Hollywood superstar and UN special envoy, Angelina Jolie, has continued her fight against the sexual exploitation of women all over the world, especially in conflict zones where young girls are sold off for as little as $40 each and raped.

The actress appeared alongside former Foreign Secretary, William Hague, before the House of Lords Committee to speak about their campaign against sexual violence in conflict.

“For over 10 years I had been visiting the field and meeting with families and survivors of sexual violence who felt for so long that their voices simply didn’t matter – they weren’t heard and they carried a great shame. I remember distinctly meeting this little girl, who was very young – probably about 7 or 8 – and she was rocking backwards and forwards and staring at the wall and tears streaming down her face because she had been brutally raped multiple times.” She said.

According to The Independent, Jolie described how she had felt“absolutely helpless” after meeting one young girl who refused to speak to anyone after being “brutally raped multiple times”.

She said what was even worse than the physical violence was the feeling of worthlessness they felt when men bartered over their monetary value when selling them off as sex slaves.

“More recently I met a 13-year-old girl in Iraq who had been kept in a room with many other girls. They were taken out in twos, brought to this very dirty room with this dirty couch and raped repeatedly. They told me what was even worse than this physical violence was they had to stand in rooms and watch their friends be sold. To hear men arguing over what they were worth. Were they worth $40, $50? What was the price, their value? And how humiliating that was.”

Updating the committee on progress since then, Jolie said:

“The most important thing is to understand what it’s not: it’s not sexual, it’s a violent, brutal, terrorizing weapon, and it is used unfortunately everywhere. The most aggressive terrorist group in the world today knows what we know; knows that it is a very effective weapon and [is] using it as a center point of their terror and their way of destroying communities and families and attacking, destroying and dehumanizing.” She added: “I know what would happen to my family if I were raped or my daughters were raped. All of you sitting in this room. What would that do to their lives, to your family structure? You would want to know it was wrong and that the world thought it was wrong and the person who did this to you didn’t just walk away.”