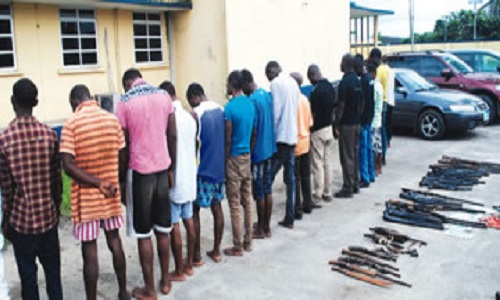 The Nigerian Army has arrested a soldier who specialised in training Niger Delta militants during its arms and ammunition mop-up in Kula Community, Akuku-Toru Local Government Area of Rivers State.

Lieutenant Colonel Timothy Opurum, Commanding Officer of 2 Brigade Garrison of the Nigerian Army, Port Harcourt, made this known to the News Agency of Nigeria (NAN) in Port Harcourt on Tuesday.
Opurum said the soldier, a member of 13-man-militant gang alleged to have been terrorising many communities in Rivers, deserted the army in 2002.

“Based on intelligence reports, we carried out a sting operation where we captured 13-member militant gang including their notorious kingpin leader, simply known as Kenneth.

“We also arrested a soldier, who deserted the army in 2002 and specialised in training of militants in weapons handling and operational tactics.

“The soldier (names withheld), who is a Private, joined the army in 1998 and served in 331 Artillery Regiment, Kalapanzi Barracks in Kaduna before he was declared missing in 2002.

“The soldier, who is related to the kingpin of the militant group, is still in our custody and will be released to prosecuting agencies after formal dismissal from the army”, he said.

Opurum said that troops raided the community on account of incessant cases of militancy, kidnapping, piracy, cultism and killings which occurred regularly in the area.

The commanding officer said that intelligence revealed that the community was not only serving as hideout for criminals but hoodlums were also storing caches of arms and ammunition in the area.

He said the raid was ‘highly successful’ as arms and ammunition were recovered by troops during the operation.

“However, some of the arms and ammunition had already been moved by the militants before our troops arrived at the community.

“Twelve suspects excluding the deserter-soldier, the arms and ammunition had been handed over to the state Directorate of Security Services (DSS) for further investigation and prosecution”, he said.

Opurum, who led the operation, however, denied allegation that troops opened fire on innocent fishermen and traders and destroyed their wares during its operation in the community.

According to him, it is untrue that soldiers assaulted innocent civilians during the operation to mop up arms and criminality in Kula community.

“There was no case or cases of manhandling both on the part of civilians and on the suspects who were arrested over their involvement in gun running activities”, he said.

Share
Facebook
Twitter
WhatsApp
Previous articlePDP Describes The Exit Of Ndoma-Egba As Painful, Begs Him To Reconsider His Stand
Next articleIf You Want To Be Happy, Never Do These 6 Things
- Advertisement -