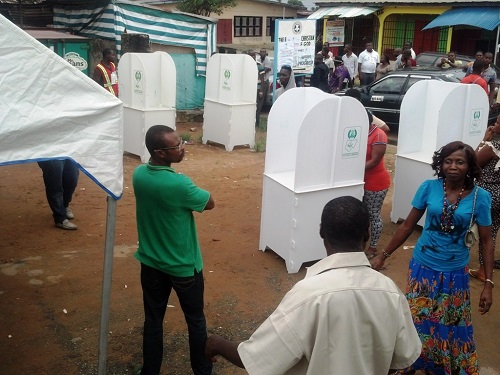 With yesterday’s submission, the number number of local governments the Army said people were not allowed to vote has risen to five. On Wednesday, the Army said there was no voting in Tai Local Government.

Captain Garba Sani, who led troops in Tai Local Government Area during the election, testified that election did not hold in the entire area on April 11.

The captains said the heavy presence of armed hoodlums at every polling centre in the four local governments prevented officials of the Independent National Electoral Commission (INEC) from conducting the election and the electorates from voting.

The four officers appeared before the tribunal following the subpoena served on the Chief of Army Staff, Maj.-Gen. Tukur Buratai.

The subpoena was obtained from the tribunal by the All Progressives Congress (APC) and its candidate in the election, Dr. Dakuku Peterside, who challenged the declaration of Governor Nyesom Wike of the Peoples Democratic Party (PDP) as winner of the poll.

In his testimony, Captain Al-Makura told the tribunal how his troops fought to repel attacks from unidentified criminals who attacked polling units repeatedly.

He said most of the polling stations in the local government were attacked by armed gangs which took electoral materials and disappeared with them into the bush.

According to the army captain, corps members who served as INEC adhoc staff were brutalised when they resisted the thugs who carted away electoral materials.

He added that electoral materials meant for the election were diverted as they disappeared immediately on arrival at the local government headquarters.

The army captain, who patrolled Ikwerre Local Government Area with 30 soldiers, said he visited all parts of the area, such as Omerelu, Ubima, Apani, Alu, Ozuaha and Isokpo the local government headquarters, and never noticed anywhere voting took place on the election day.

“In Ozuaha, roads were barricaded and on sighting our patrol vehicles the hoodlums who mounted the barricade ran into the bush. We received calls and on getting to some polling units, the INEC ad hoc staff told us that some hoodlums came and beat them, collected electoral materials and ran away. I never saw any electioneering taking place in any of the wards”, he said.

The witness, who was deployed from 101 Battalion in Giwa Barracks, Maiduguri, Borno State, added: “That same day, we started hearing gunshots in the town. I had to move my men to see if we could arrest those who were firing the shots. At Okiri Street to be precise, we picked 13 shells on the ground.

“In the morning of the election, there were still gunshots at the local government headquarters. There was distribution of electoral materials at the INEC office but I can tell you that before they got to their destinations they were hijacked”.

Captain Salihu, the second witness, told the tribunal about the breakdown of law and order in Gokana, a situation that necessitated the deployment of Armoured Personnel Carriers from Mopol 56, Sakpenwa to the flashpoints.

Under cross-examination, Captain Salihu affirmed that his team provided security on the day of the election in the council, which consists of 17 wards.

“I was at the INEC office in the morning when they brought the election materials and the armed men came and started shooting. I did not respond to the shooting because of collateral damage”, Salihu said.

He recalled how the shooting became so intense, even with the presence of his troops. But to avoid unnecessary loss of lives; they decided not to return fire.

The army captain alleged that the situation was so bad that even collation at some point took place at a police station. He added that his patrol also encountered dissatisfied members of a community, who were protesting the absence of electoral materials and their inability to vote during the election.

“In the course of my patrol, I received a call from a primary school in Mogoh. On getting there, there was shooting from across the fence. We responded and the shooters were shooting as they withdrew. We were able to pull out the INEC permanent and ad hoc staff and took them to INEC office”, he said.

The story was the same in Ogba/Egbema/Ndoni LG as election materials were hijacked from INEC ad-hoc staff shortly after they were distributed at the INEC office at the council headquarters in Omoku on the day eve of the election, Captain Bala, who said he had been in in the area since January because of incessant cult activities, told the tribunal.

Captain Abubakar said he led a team of 20 soldiers to patrol Abua/Odual during the election. He said he received many calls from people about incidents of election materials theft from various polling units.

“I received calls from INEC staff that their electoral materials had been hijacked by hoodlums. We kept receiving such calls and we tried our best to retrieve the materials but we could not. We received distress call from Okana. Close to their town hall, we rescued some indigenes, and we took them to police station for safekeeping”, Abubakar said.

The army captains, who were eye witnesses, having served as commanders, were in agreement over uncontrollable violence, snatching of electoral materials, intimidation and absence of proper election.
During cross-examination by counsel for the respondents – Dr. Onyechi Ikpeazu (SAN) for the Independent National Electoral Commission; Mr. Emmanuel Ukala (SAN) for Wike and Mr. Ifedayo Adedipe (SAN) representing the PDP – the officers insisted that there was no evidence of conduct of election in their various areas on April 11.

Led in evidence by their lawyers Chief Akin Olujimi (SAN) and Chief Niyi Akintola (SAN), the army officers denied allegations leveled against them by the respondents’ lawyers that they appeared before the tribunal to help the APC.

As at last night, the petitioners had called 39 witnesses.