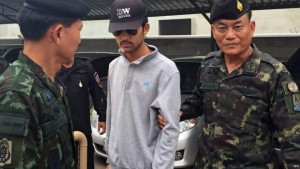 A second foreign suspect has been arrested in connection with the deadly bombing at a Bangkok shrine in August, the Thai prime minister has said. The male suspect was arrested in Sa Kaeo province, east of Bangkok on the border with Cambodia, Prayuth Chan-ocha told reporters.

He described the man as “a main suspect”. A foreign man was arrested in Bangkok on Saturday over the blast at Erawan shrine, which killed 20 people. Thai military authorities have been interrogating the 28-year-old man, but they have not yet released his name or nationality.

Bomb-making materials and forged passports were found at the apartment where he was detained in Nong Jok on the outskirts of Bangkok, and he has been charged with possessing illegal explosives, police said.

It is unclear whether either of the two arrested men are the suspect seen on a security camera leaving a backpack at the crowded shrine shortly before the bombing on 17 August.