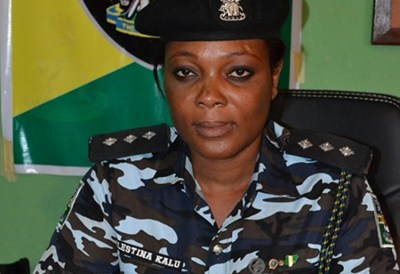 An operations manager with a “new generation” bank located at Effurun, near Warri, has been arrested by the Delta State Police Command after he was allegedly fingered in a failed robbery attempt on the bank.

Also arrested by the police is a dispatch-rider with the bank, who allegedly connived with the said manager and others still at large to plan the robbery operation, which was however botched by the police and other security operatives.

An undisclosed amount of money allegedly hidden within the bank’s premises has also been recovered after the aborted bank robbery attempt.

Delta State Police Public Relations Officer (PPRO), Mrs. Celestina Kalu, a deputy superintendent of police (DSP), who revealed this to newsmen on Friday, said that the an attempt by bandits to rob the bank two weeks ago was foiled because the police had prompt intelligence on the plan.

She identified the bank’s operation manager as “one Francis Enebeme”, and the bank’s despatch rider who were allegedly involved in the planning and execution of the foiled robbery operation as “one Wilfred Akah”.

Mrs. Kalu noted that the security surveillance paid off as the robbers were successfully beaten back by the police.

According to her, “At about 17.23hrs (5.23pm local rime) on September 4, 2015, the hoodlums invaded the said bank, but they were successfully repelled by a combined team of SARS operatives and mobile policemen on duty at the bank.

“Various sums of money hidden in the offices by the suspects were equally recovered”, the police spokeswoman said, adding that further investigation into the matter was ongoing.

Meanwhile, the PPRO also disclosed the successful rescue of a kidnapped victim when a team of policemen stormed the hideout of the kidnappers at Ibusa, near Asaba while they demanded for ransom form the family members.
The victim reportedly told the police after his rescue that he “was lured by the criminals to Ibusa through the internet for a job offer.”

The raid followed a tipoff, with two of the suspects reportedly arrested dying later from the bullet wounds they received. “However, the suspects later gave up the ghost on the way to hospital”, she said.

She revealed that “the hoodlums on sighting the policemen abandoned their victim, Mr Odaro David Iyawe, and fled.”

“The policemen shot and arrested the two suspects who gave their names as one Uche Nwadali of Nando in Anambra State, and Austin Okolie of Ibusa.
“The suspects named one Collins Oligidi, the son of the owner of the house where the victim was kept, currently on the run as their cohort.”