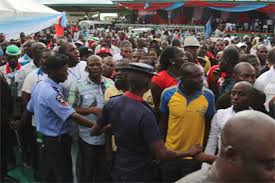 The Governorship primaries of the All Progressives Congress (APC), in Bayelsa State, yesterday gave a glimpse of what to expect from the party in the December 5 governorship election in the state as the electoral process was hijacked from the Edo State Governor, Adams Oshiomhole-led Electoral Committee with allegations of irregularities and use of cloned identification documents marring the exercise.

In a parallel exercise organised by the state executive of the APC without Oshiomhole and some members of his committee, former Governor of the state Chief Timipre Sylva won with 726 of the 807 votes cast, while Timi Alaibe, who was not present scored four votes. He was returned as winner by Mr. Nelson Alakgba, a member of the primary committee.

Lamenting how things went, Alaibe said: “The rancorous accreditation process leading to the primaries was fraught with irregularities, violence, intimidation and complete disrespect for aspirants, agents and party officials. This is an enactment of negative issues for a party that stands on the mantra of change. I think something is missing somewhere and we need to get it right.

“Some of us, as aspirants had some delegates who are loyal to us threatened, beaten and wounded since morning. We have a quite number of people who are not delegates, the real delegates are outside. Some of the fake delegates have identity cards that are cloned.

“I believe we need to put a stop to this process. We are going to meet with the chairman of the committee and we are going to ask for a cancellation of this process to start at some other time so that they can get the security dynamics right and the process and methodology of primaries right. “We are disappointed that this can happen in an internal family arrangement. For some of us, this process cannot continue and we cannot continue with this process because there are a lot of irregularities and I am totally discontented.”

Another aspirant, Prince Ebitimi Amgbare also called for the cancellation. “As a matter of fact, I am the reason for this event holding here today. I cancelled the elections that was held in 2007 when I contested with Sylva and that is why we have this isolated elections in Bayelsa State. And if we cancelled an election because it was not properly organised, I believe that this primary should be better organised.

“The process has been hijacked and the secretary of the committee has lost control because the chairman is not here. We know the style and character of Adams Oshiomhole and I am sure that if he was here early, he would have held sway. And because he is not here, it is affecting the process, but as far as I am concerned, we cannot go on with this process because it will lead us to nowhere. I stand to say that as it is today, this process must stop,” he said.

In a simlar vein, another aspirant, Preye Aganaba, said the process of the primaries is unlike what the APC is known for.

“I am ashamed today that the APC would be organising a primary in this way, because I was a member of the last presidential primaries in Lagos and we had a successful convention and when the winner emerged the other aspirants supported the candidate but the process today is flawed. It is a pity that most of the delegates that have been accredited are all fake.

“I want to join other aspirants to ask for a cancellation immediately because this is unlike APC. I toiled, sweated and paid for this party to be established in Bayelsa state, and if I am asking for this you should know how pained I am,” Aganaba protested.

“I am not an agent and if there are people with cloned cards, we will make sure they are arrested. I was part of the arrangements put in place. Among all the aspirants, I am the only one with the credentials; someone who has done a term here.”

When the 19 governorship aspirants met Governor Adams Oshiomhole, they accused the state executive committee led by the State Chairman, Chief Tiwei Orunimigha of hijacking the process and encouraging the rowdy invasion of the election venue by suspected thugs.