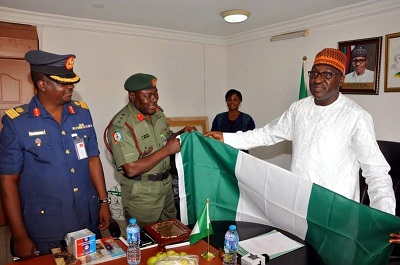 The Defence Headquarters has called for closer collaboration with the National Orientation Agency in the fight against Boko Haram.

The Director of Defence Information, Col. Rabe Abubakar, made the call when he visited the agency’s headquarters, a statement in Abuja on Monday by Assistant Director, Press, at NOA, Mr. Paul Odenyi, said.

Abubakar said he was visiting to solicit more cooperation with the agency in line with its mandate to communicate activities of government and inspire patriotic sentiments among the public.

The DDI pointed out that the work of building confidence in the civilian populace was also critical in the fight against insurgency.

Speaking at the meeting, the Director General of NOA, Mr. Mike Omeri, urged the military to continue to work harder to defeat terrorists.

Omeri said, “The battle is also in the minds. That is why we need to establish strong synergy to ensure that we also defeat fear, anxiety and ill feeling towards ourselves. This is what the insurgents want to show to the world”.

He said it was necessary for the military and the NOA to ensure that the propaganda materials from the insurgents were not allowed to rule the airwaves.