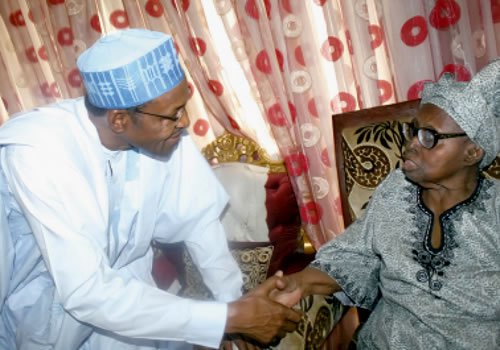 In a statement by his Special Adviser on Media and Publicity, Mr. Femi Adesina, the president extended condolences to the Awolowo family, especially the children, grand and great-grandchildren on the death of their famed matriarch, just a few weeks to her 100th birthday.

Chief (Mrs) Awolowo, also known as Yeye Oodua, died in her sleep early hours of Saturday at the age of 99.

According to the statement, Buhari said the late matriarch of the Awolowo family would be remembered and celebrated as the famous spouse and pillar of strength of the late nationalist, political leader and sage.

The statement read in part, “President Buhari believes that Chief (Mrs.) Awolowo will always be honoured too for the indelible legacy of very significant, behind-the-scene contributions to communal, state, regional and national development which she has left behind.

“The President prays that God will comfort Chief (Mrs.) Awolowo’s family, relatives, friends, associates and admirers, and grant them the fortitude to bear her irreparable loss.

“The President also condoled with the Vice President, Yemi Osinbajo, who is also an in-law to the Awolowos”.