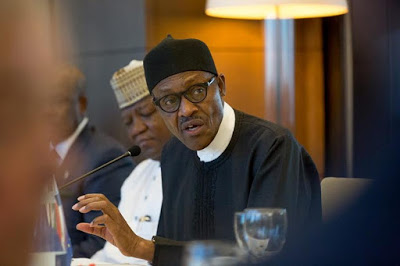 President Muhammadu Buhari on Tuesday said that one of the key objectives of his administration’s ongoing economic reforms was to restore investors’ confidence in the Nigerian economy.
He made the remark while addressing leading French businessmen and investors at the headquarters of the Movement of the Enterprises of France (MEDEF), in Paris, France.
A statement issued by his Senior Special Assistant on Media and Publicity, Garba Shehu, quoted President Buhari as reaffirming his government’s determination to curb corruption in Nigeria.
“Our ongoing economic reforms are designed to restore business confidence and block leakages and wastage of public resources. We are also focused on the recovery of stolen wealth belonging to the country”, the president told participants at a Nigeria-France Investment Forum.
He also promised that his administration will do all within its powers to sustain Nigeria’s position as the number one investment destination in Africa.
“With a blessed land, rich in agricultural and mineral resources, skilled and low-cost labour, large market, a robust and competitive private sector anchored on investment policies and legislation to guarantee predictability and consistency with global business practices, we are poised for double digit growth.
“There is much more to our country than oil and we are determined to consolidate on industrializing Nigeria and diversifying its economy.
“The privatisation of key sectors of our economy, which was started under previous administrations, will be pursued and expanded to include other sectors. This exercise will be conducted in an open, transparent and competitive manner.
“We recognize the private sector as the engine of growth and a veritable partner in our economic agenda, and will therefore give the fullest possible support to foreign and domestic entrepreneurs.
“Our administration is poised to redress the serious infrastructural gaps in Nigeria, raise production to create more jobs, build capital and stimulate further growth and prosperity of the country”, Buhari stated.
The president also used the opportunity to disclose that the trade volume between Nigeria and France had hit $5 billion, stressing that opportunities abound to greatly expand it into such critical areas as agriculture, energy, automobile and skill development.

“It is a positive development that today Nigeria is the largest trading partner with France in Africa. But opportunities abound to greatly increase the current $5billion annual trade volume, and I fully agree with President [Francois] Hollande when he declared in February, 2014 in Abuja that trade volume between both countries should double in four years. Today, many French companies are happy to have flourishing businesses in Nigeria, opportunities abound to greatly increase the $5billion annual trade volume between the two countries”, he stated.

President Buhari commended Pierre Gattaz, President of the MEDEF, the organisers of the French-Nigeria Business Forum for putting up the platform, saying he looked forward to their business trip to Nigeria in three weeks’ time.
Mr. Gattaz earlier, said the umbrella organization of about 800,000 French manufacturing firms and businesses will undertake a trade mission to Nigeria next month.