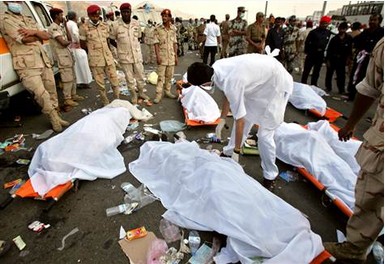 President Muhammadu Buhari today expressed sadness over the calamity which occurred on Thursday in Saudi Arabia, which claimed the lives of hundreds of pilgrims, including some Nigerians.

In a statement issued by his Special Assistant on Media and Publicity, Mr Garba Shehu, the president said he believed that the stampede at Mina near Mecca in which a notable Nigerian Journalist, Hajiya Bilkisu Yusuf, Prof. Tijjani El-Miskin and others lost their lives was a monumental tragedy, not only for citizens of the countries involved, but for the global Islamic community.

He commiserated with the families of the over 700 pilgrims who lost their lives in the stampede less than two weeks after a crane collapsed in Mecca and claimed more than a hundred lives.

Buhari also condoled the Nigerian Guild of Editors and the Nigerian Union of Journalists on the sad loss of Hajiya Bilkisu, whom he described as an exemplary, dedicated, knowledgeable, very credible, highly-respected, outstanding editor and columnist who, even in death, would remain a glittering role model for journalists, within and outside Nigeria.

The president urged King Salman of Saudi Arabia to ensure ‎a comprehensive and thorough exercise that would identify any flaws in Hajj organisation with a view to avoiding a recurrence of such tragedies during the annual pilgrimage.