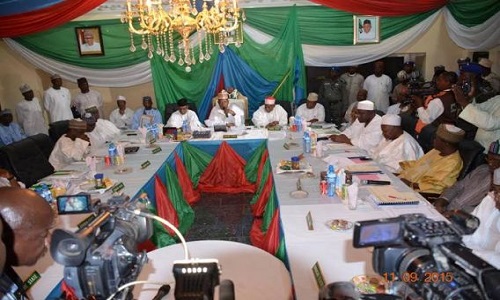 Governor Kashim Shettima of Borno State has described the sequence of events that followed the inauguration of President Muhammadu Buhari on May 29 as a silver lining in the dark clouds that have hovered over the northern region for too long.

The problems of insurgency, poverty and bad governance among others, the governor noted, have turned the region into a laughing stock in recent years despite the good legacies handed over to the present generation of leaders by past leaders, especially the late Sardauna of Sokoto, Sir Ahmadu Bello.

Shettima spoke in his capacity as the chairman of Northern Governors’ Forum at the opening ceremony of the maiden meeting of the Governors in Kaduna on Friday.

He lamented the predicament of the region, saying things have become so bad that the region has “become a thriving nest for war, terrorism, deep seated social divisions, senseless violence, mind-boggling intolerance, injustice, destitution, joblessness, and all manners of other social vices, the height of which is the madness called Boko Haram”.

“Things have become so bad, so much so that we can say without fear of contradiction that in Nigeria today poverty glaringly wears a bold Northern face. We have turned our region into a laughing stock, derided by friends and foes alike, and, not without justification, as having dragged the rest of the country down with us”.

However, Governor Shettima told his colleagues that the time was now to change and embrace “the cusp of a new era, the promise of a transition from seemingly interminable years of hardship, poverty and turmoil – the proverbial Locust Years – to a period of hope, prosperity and calm” as personified by the present national leadership.

He added: “For the first time since the early 1980s, the political leadership of the Northern states is poised to reverse the negative trends that had so readily sown the destructive seed of mutual suspicion, distrust and animosity among the teeming people that occupy the vast lands of our states. I can see the signs of sincere effort and genuine optimism to draw strength in our diversity and change the narrative of our troubled history in the interest of our region’s history, and indeed, the rest of Nigeria.

“As leaders of our people at this crucial epoch of our history, and democratically elected ones at that, we are left with no choice but to rise up to the occasion and live up to people’s perfectly understandable expectations. We must seize this moment, for history is beckoning at us”.