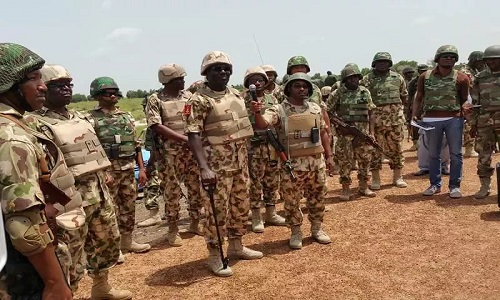 In a bid to motivate soldiers and give them a sense of belonging, the Chief of Army Staff, Lt.-Gen. Tukur Buratai, on Friday organised a Sallah “get-together” for wounded soldiers in Yola.
Speaking at the ceremony, Buratai said the gesture was to motivate the gallant soldiers who were fighting insurgency.
Represented by Commander, 23 Armoured Brigade, Yola, Col. Aba Popoola, the army chief said the gesture was also an expression of love to the wounded soldiers and their families, especially during this festive period.
“This is not the first of its kind; if you can recall, the Chief of Army staff had organised a similar event in Damaturu for the gallant soldiers”, he said.
He expressed satisfaction that the wounded soldiers were responding positively to treatment.
According to him, the soldiers were from the 23 Armoured Brigade, Yola, and 28 Task Force Brigade in Mubi and some from Gwoza in Borno State.
Responding on behalf of the soldiers, Cpl. Jonathan Okiki thanked the chief of army staff for identifying with them and their families.
“We assure you sir, that as soon as we leave the hospital, we will be eager to go back to the battle field to fight Boko Haram”, Okiki said.