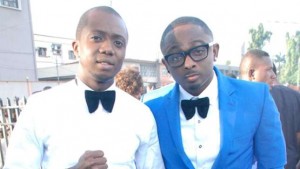 Rumors have been spreading for months about a rift between pop act Sean Tizzle and his producer/record label owner D’Tunes.

According to reports, Sean Tizzle’s tour in America in April was not approved by his record label, Difference Entertainment owned by D’Tunes.

During this period Sean Tizzle had started showing off his Tizzle Nation which he claimed was a ‘movement’ and not a label.

Reacting to Sean Tizzle’s behaviour D’Tunes signed 5 acts when the pop artiste was still in America.
The artistes were Q-Dot, Bad Boy Ace, D-O, ATM, and Kue Bounce, the move did not go down well with Sean Tizzle.

The ‘Perfect Gentleman‘ singer who is now back in the country spoke to Hip TV and squashed the rumours of beef between him and D’Tunes recently.

“There is no wahala. We are gentle people. We are just a group of perfect gentlemen. And I am talking about the rumours that me and my boss (and also the number one producer in Africa)…every time its Sean Tizzle its a hit so why we go come fight” Sean Tizzle told Hip TV.

“Money is sweet. The progress is interesting, so one love. So don’t spread wetin no be am” he further said.

Sean Tizzle signed to Difference Entertainment in 2013. His debut album ‘The Journey‘ was released in 2014 and won several awards.

The album was produced by D’Tunes.