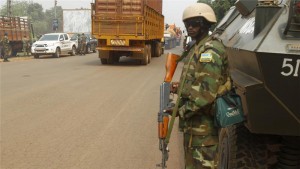 Renewed violence between Muslim and Christian communities in the Central African Republic has killed at least 36 people and wounded at least 80 more, according to hospital workers.

Sporadic gunfire could be heard in the capital, Bangui, on Monday, with journalists also citing multiple reports of widespread looting in the city, suggesting that tensions that began on Saturday had yet to subside. On Sunday, Doctors without Borders (MSF) said in a statement that their teams working in the city’s Mpoko camp, Castor hospital and Hopital General had been pressed to activate mass-casualty plans to cope with an influx of the injured.

“In total MSF received 75 wounded patients, and the teams stabilised patients and performed 15 surgeries,” MSF said. Emmanuel Lampaert, MSF head of mission in Central African Republic, said: “It’s very sad to see violence of such a scale occur once again, as we haven’t experienced anything like this since October last year.