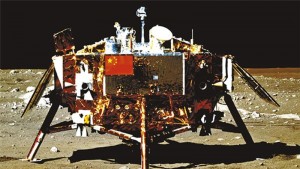 China has announced its intent to send a lunar probe to the far side of the moon within the next five years, a senior scientist working on the project said. Aljazeera reports:

Zou Yongliao, from the moon exploration department of the Chinese Academy of Sciences, said his country would be the first to reach the “dark” side of the moon, if the project succeeded. The mission will be used to study geological conditions on the moon’s far side, which is not visible from earth.

Zou said the far side of the moon had a “clean electromagnetic environment, which provides an ideal field for low frequency study”.

“If we can can place a frequency spectrograph on the far side, we can fill a void,” Zou said.  The probe, Chang’e-4, is similar to the ones used in China’s previous lunar missions, but will have a higher payload. China became the third country, after the US and the former Soviet Union, to land a probe on lunar soil when it’s Chang’e-3 probe reached the moon in 2013.