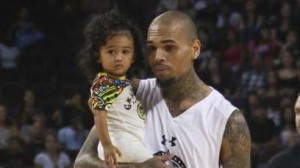 Famous R&B star, Chris Brown, has continued to impress with his angelic attitude every time he’s around his daughter,  Royalty.

Chris Brown’s one-year-old daughter made sure she gave her dad her best dance steps to his latest track, ‘Zero’.

In a video posted on Instagram by Breezy on September 22, Royalty could be seen showing off her unique dance moves while getting some help from the pop superstar.

The most adorable part was when Chris Brown joined in, and Royalty actually tries to mimic his moves.